The community hall at Nauteyri was destroyed by fire in 2002, and it has taken many years of effort to restore it to house a museum/study centre commemorating poet Steinn Steinarr. Steinshús is managed by a non-profit organisation of the same name. The building totals about 150 m², of which an apartment occupies about 50 m², and the museum 100 m². The restoration of the building is now complete, and Steinshús was formally opened on 15 August 2015. The café opened in late May 2016. Steinshús is open from May to September each year.

The museum includes a room whose furnishings evoke the story of the poet’s life, some of which have been provided by his descendants. An exhibition tells the poet’s story, including replica manuscripts and books provided by the National and University Library of Iceland. Visitors can hear the poet reading his work aloud, as well as music composed to his words. Steinshús has been given about 800 volumes, which are available to visitors in the library. The apartment for visiting scholars has all necessary fixtures and fittings.

The exhibition which opened at Steinshús on 15 August 2015 recounts the story of Steinn Steinarr’s life: his early years in the West Fjords and then in the west of Iceland; his acquaintanceship with verse through poets Stefán frá Hvítadal and later Jóhannes úr Kötlum, who was his teacher; his first ventures into verse, schooling at Núpur, labouring work; getting his verse into print; the original version of his iconic work Time and Water; meeting and marrying Ásthildur Björnsdóttir; travels; mentoring younger poets; the poet’s final years and untimely death.

Maps were disabled by the visitor on this site. Click to open the map in a new window. 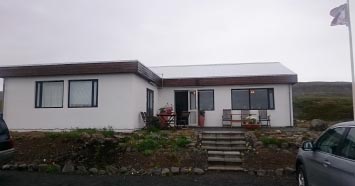 The design of Steinshús was guided by the principle that both museum and apartment should meet all modern standards – for instance with respect to toilet facilities, security and exit routes. The museum facilities can thus safely be used for a range of purposes, such as meetings, café, theatrical performances, etc.